A reishi liquid culture tested on a Petri dish (Amsterdam)

On March 2014, while living in Münich, I started to write a little manual on DIY mushroom cultivation, this work brought me to visit many farms and laboratories around Europe. Some months later I had a nice draft between my hands, but I still wanted to learn real practical skills on field, therefore later in September I moved to Amsterdam. Being in the Dutch capital city I started to communicate and share my knowledge through workshops and other activities in the biolab of the Mediamatic’s Fabriek. There I built an extensive collection of fungal cultures and I started different  related projects, like researching on new mycelium-based biomaterials for insulation and other purposes, an enterprise running in cooperation with the Universiteit Utrecht. In Amsterdam I also worked as lab technician for Mondo Mycologicals, a company that focuses on the production of DIY mushroom kits, liquid cultures and spore vials. 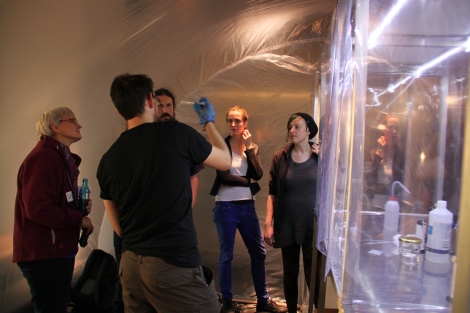 During my time in the Netherlands I met an international network of very lovely and innovative people, most of them designers, like the charming Julia Krayer from Dezentrale, but also mushroom farmers and scientific hools. Personalities like Phil Ross from Mycoworks, Wouter Hassing from Mycophilia, Peter van Boheemen from the Waag Society or Katharina Unger founder of LIVIN studio. I should mention the inspiration given to my by the senior scientists Toby Kiers and Matthew D. Whiteside, both professors and researchers on mutualistic interactions in the Vrije Universiteit of Amsterdam. 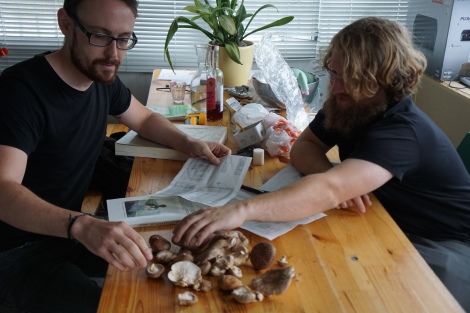 My colleague Lukas Pressler and me giving a biofabrication workshop in Halle (Germany). Photo: picture alliance/dpa

Starting 2015 I was literally on fire, giving workshops and lectures in Germany, Belgium, France and all around the Netherlands. I went to Gent, Brussels, Paris, Berlin and Halle (Saale), a beautiful municipality close to Leipzig, where Dr. Filipe Natálio and Prof. Aart van Bezooije granted me the opportunity to give a 3-day workshop in February for the students of the Burg Giebichenstein Kunsthochschule Halle, under the agenda of the platform GROW. In March I left my jobs in Amsterdam and having extra time I helped out the magnificent people of ADM Amsterdam to start a little mycoremediation experiment in their lands, an old shipyard polluted by crude oil products. In April-May I assisted Doreen Westphal to set-up her project Fungi Futuri, an urban mushroom farm in Eindhoven, which is actually blooming happily as its Facebook page manifests.

Together with Doreen I travelled once more to Belgium to visit the laboratories of one of the most important European mushroom companies; Mycelia, which sells top-quality mushroom spawn and cultures. We also visited the German mushroom farm Biolandhof Speisepilze Schmöning in Haltern am See and stopped by in Dortmund to give a workshop in Dezentrale, assisted by my friend Violeta Figueroa, a Spanish biologist. Later on I joined a conference and a guided tour through the mushroom research installations at the Wageningen University in The Netherlands, the event was directed by the professor and scientist Dr. Anton Sonnenberg.  Finally, and returning the favour to Violeta, I travelled to Madrid (Spain) twice in May and June to assist two of her mushroom workshops.

Dr. Anton Sonnenber explaining the results of his research on mushroom cultivation at the Wageningen University (The Netherlands)

After all this, and back in the Netherlands, I got time to enjoy nature and the summer temperatures for a couple of weeks in Dordrecht, where my friend Rob borrowed me the key of his apartment. He also didn’t hesitate to show me the best corners of De Biesbosch with his little boat, navigating through the canals and sleeping in the wild around camp fires while searching for mushrooms or spotting beavers and other amazing animals. That was a crucial point to reconstruct myself after many months on the road. I am infinitely thankful with you, Rob el barquero. 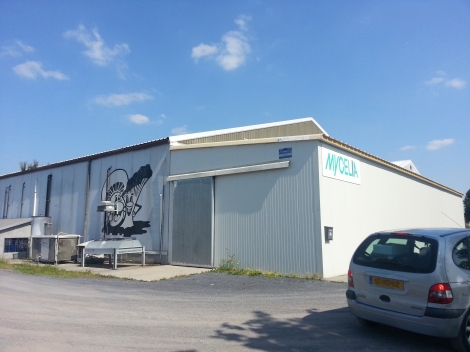 Visiting the headquarters of Mycelia in Belgium

Kombucha cultures given to me by Julia Krayer accompanied with an aquarela depicting oyster mushrooms, a gift by Emma Aussems