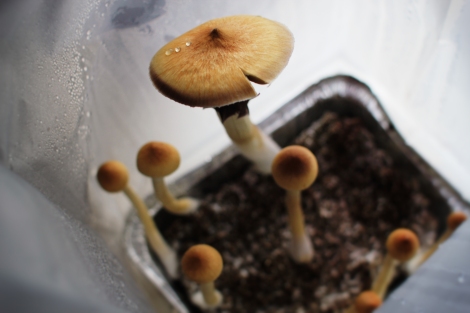 Researchers have found that low doses of psilocybin, the active substance in magic mushrooms, help mice overcome conditioned fear response, opening up the possibility of use of psilocybin in the treatment of post-traumatic stress disorder (PTSD).
The research study titled “Effects of psilocybin on hippocampal neurogenesis and extinction of trace fear conditioning,” published in the June issue of the journal of Experimental Brain Research, by a team of scientists, including Dr. Briony Catlow of the Lieber Institute of Brain Development and Dr. Juan Sanchez-Ramos, professor at the University of South Florida, studied the effect of low doses of the hallucinogen psilocybin in mice conditioned to exhibit “fear response” to an auditory tone linked to a painful stimulus, specifically, an electric shock delivered soon after the mice were exposed to the auditory tone.

The researchers found that mice administered low doses of psilocybin overcame the conditioned fear response faster than mice that did not receive the drug.

According to the study co-author, Sanchez-Ramos, “They stopped freezing; they lost their fear [faster].”

Although, the results apply only to mice, the researchers believe it paves the way for further studies exploring the possibility of using the psychoactive compound to treat post-traumatic stress disorder in humans.

Based on previous studies which found that psilocybin binds to a brain receptor that promotes neurogenesis (growth of brain cells) and enhances short-term memory formation, the researchers investigated the role of psilocybin in the formation of short term memories associated with conditioned fear responses as it occurs in patients with PTSD.

According to the study abstract, based on the previous knowledge that “drugs that modulate serotonin (5-HT) synaptic concentrations impact neurogenesis and hippocampal (HPC)-dependent learning,” the “primary objective” of the study was to “determine the extent to which psilocybin (PSOP) modulates neurogenesis and thereby affects acquisition and extinction of HPC-dependent trace fear conditioning.”

After the mice had acquired conditioned fear response to the auditory stimulus, the researchers then exposed them to it repeatedly without administering electric shock with the purpose of teaching them to unlearn the conditioned fear response. At first, the mice exhibited “freeze response” associated with “fear conditioning” when they heard the auditory tone, but gradually began losing the response when shocks were not administered, showing that they no longer associated the sound with the electric shock.

The researchers found that mice receiving a low dose of psilocybin, believed too low to cause psychoactive effects such as hallucination or altered states of consciousness, overcame “fear conditioning” faster than mice that were not receiving the low-doses, and faster than a separate group of mice receiving high-doses. The group receiving low-dose psilocybin also overcame “fear conditioning” faster than yet another group on Ketanserin (a drug that counteracts the receptor that binds psilocybin in the brain) and finally a control group on saline.

Space-filling model of the psilocybin molecule, the drug found in magic mushrooms. It is hydrolyzed in the body to the hallucinogenic psilocin. This image shows the neutral form. Black: Carbon; White: Hydrogen; Blue: Nitrogen; Orange: Phosphorus.

They also found that the mice on low-dose psilocybin showed a significantly higher growth of new brain cells (i.e. neurogenesis).

According to the authors:

At the low doses of PSOP that enhanced extinction, neurogenesis was not decreased, but rather tended toward an increase. Extinction of “fear conditioning” may be mediated by actions of the drugs at sites other than hippocampus such as the amygdala, which is known to mediate the perception of fear.

The authors concluded that psilocybin appeared to have promoted growth of new brain cells and that by this means it helped to erase previous memories inducing “fear response.”

PSOP facilitates extinction of the classically conditioned fear response, and this, and similar agents, should be explored as potential treatments for post-traumatic stress disorder and related conditions.

Although, the researchers were unable to explain how psilocybin worked to extinguish “fear conditioning,” they speculated that it could be due to the ability of the substance to alter neural circuitry connections.

Catlow told Real Clear Science: “Memory, learning, and the ability to relearn that a once threatening stimuli is no longer a danger absolutely depends on the ability of the brain to alter its connections. We believe that neuroplasticity plays a critical role in psilocybin accelerating fear extinction.”

The researchers hope that it will be possible to conduct human trials very soon. Catlow told Real Clear Science: “It is highly possible that in the future we will continue these studies since many interesting questions have come up from these experiments. The hope is that we can extend the findings to humans in clinical trials.”

Although, the mice used in the study were administer low doses of psilocybin which the authors believed would have no consciousness altering effects, they were unable to confirm the belief directly. As Sanchez told Live Science: “Mice cannot tell you if they’re hallucinating or have altered states of consciousness.”

But it would be possible to confirm this directly in human trials. It is believed that since previous studies have shown that low doses of psilocybin produce no consciousness state altering effects or differences in feelings of “general well-being, emotional excitability, anxiety, depression, heart rate, or blood pressure,” the use of the substance for treating PTSD would hold minimal risk of adverse side effect and would thus be very likely safe.

Experts believe that PTSD arises through similar “fear conditioning” mechanisms as the mice experienced in the laboratory: PTSD and similar anxiety disorders (“neuroses”) are believed to be conditioned fear response in which the mind links a neutral stimuli with another that it perceives as threatening or dangerous.

Live Science reports that Franz Vollenweider, director of the Heffter Research Institute in Zurich, Switzerland, who has conducted related studies on psilocybin, said: “The study in mice indicates that psilocybin (possibly also at moderate doses) may help to extinct fear memory in PTSD or other groups of anxiety patients… it might well be that psilocybin may shift emotion processing towards the positive in depressed patients.”

However, Sanchez-Ramos said that researchers in the US may encounter legal restraints in conducting research on use of the substance for treating PTSD because it is a Schedule 1 drug.

Psilocybin, the active ingredient in magic mushrooms, is a psychoactive substance known to induce “mystical experiences” associated with mood elevation and sense of general well-being.